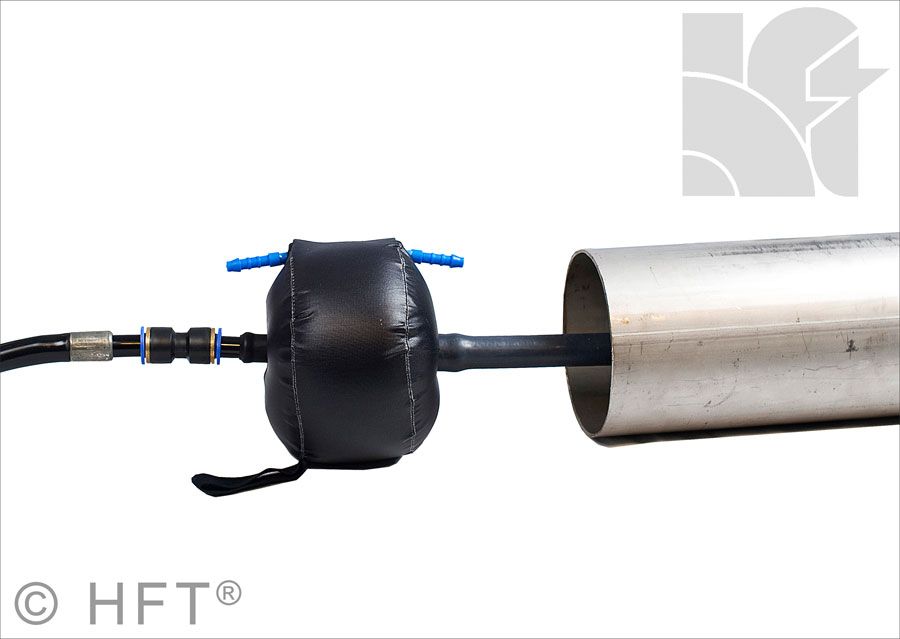 In circumstances where welds have to be designed to withstand stress in service, special consideration needs to be given to their metallurgy and profiles.

The mechanical properties of welds, particularly their fatigue properties, can be influenced significantly by their shape and composition. In particular, at the weld root, a positive reinforcement combined with smooth transition from weld to base metal is a pre-requisite to achieve optimum mechanical strength.

Joints of high quality between cylindrical sections such as tubes and pipes can only be made by ensuring that atmospheric gases are eliminated, and positive, smooth weld reinforcement is provided.

The presence of oxygen, and to a lesser extent nitrogen around the molten weld can lead to wide ranging defects. Discoloration is unsightly and in some instances might reflect metallurgical imbalance, especially with some stainless steels.

Gross oxidation inevitably results in reduction in mechanical properties and can cause catastrophic loss of corrosion resistance. Nitrogen contamination can result in brittleness. Gases in the weld may give rise to cracking during or after cooling.

It is clear that a reduction in weld section at the root, as evidenced by a concave geometry, will reduce the joint strength. Perhaps not so evident, but in many applications of crucial importance is the presence of notches or cracks, which tend to appear at the weld/base metal interface. These can propagate in service and cause failure.

Weld root quality when making tubular joints can be ensured by applying appropriate safeguards based on removal of air from the fusion zone by the provision of inert gas. This is achieved by gas purging, and the general principles are shown in this Figure 1.;

The most commonly used purging gas in Europe is commercial quality argon; in the U.S., helium has been in more general use. For specialized applications, purging techniques using argon-hydrogen and helium-argon mixtures as well as just nitrogen have been developed. The materials being joined and the welding process used are two main factors in the selection of the optimum gas or gas mixture.

The first requirement is to provide gas entry and exit points. Gas is fed through one end seal with an exit hole at the other end to prevent an undesirable build up of pressure. Argon has a greater density than air and the gas inlet should be at a lower elevation than the exhaust so that air is expelled effectively from the pipe bore.

On small pipes and tubes, where the internal volume is small, the cost of continuous total purging may not be significant. Under these circumstances wooden or plastic discs simply taped to the tube ends will be adequate. Plastic caps employed, for example, to protect pipe ends and threads during transit are commonly used. It is most important that potential leak paths are eliminated and that any branch pipes are vented to ensure complete removal of air.
When total purging is impractical, perhaps because the pipe volume is large or because access is difficult, alternative containment techniques are available. 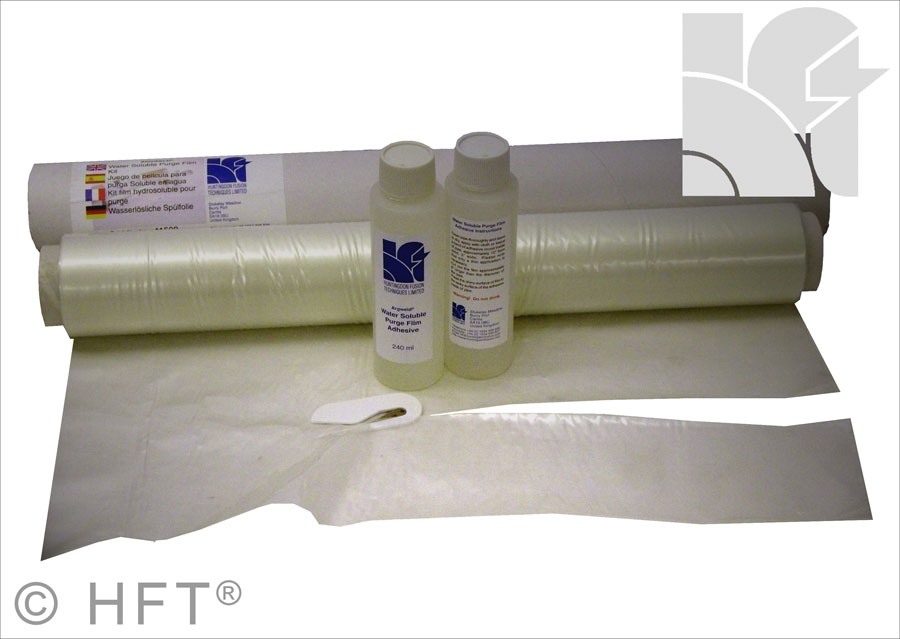 A low-cost and effective solution to providing gas coverage is to make discs from water-soluble film and fix them inside the pipes to be joined with water soluble adhesive that is provided with the film.

The discs should not be placed in position until after any pre weld heat treatment and be far enough apart, typically 500 mm, to avoid thermal damage during welding. Purge gas is introduced into the area between the soluble dams by means of a hypodermic tube through the weld joint line.

On small-diameter pipes, an effective dam can be produced simply by crumpling the film and pushing it into the pipe bore.

On completion of the welding operation, the film can be removed by passing water into the pipe and allowing time for it to completely dissolve the barrier medium.

Water-soluble products are not always acceptable, and an alternative method is to use cardboard discs. These are simply cut to fit the internal diameter of the pipe and, if necessary, taped in position to provide a gas seal.

The distance between discs should be typically 500 mm to avoid thermal damage during welding.

The thermally disposable disc solution is convenient if welding is to be followed by a post weld heat treatment cycle since the card is removed effectively by incineration. Otherwise, general heating by torch is sound method of removal.

The water-soluble and thermally disposable barriers are expedient solutions where access to the tube or pipe bore is impractical after welding. If access can be gained, several alternative purge gas damming techniques, which include collapsible discs, rubber gasket discs, and inflatable Pipe

Purging Systems can be considered.

These dams are normally placed in the pipe at the time of joint assembly, the recovery cord or rod projecting down the access route. The manufacturing designs should provide a spacing of 150 to 200 mm either side of the joint line, to prevent thermal damage during welding.

For applications involving pre-weld and post weld heat treatment there are specially designed and spaced systems available, one type being called Argweld® HotPurge™. 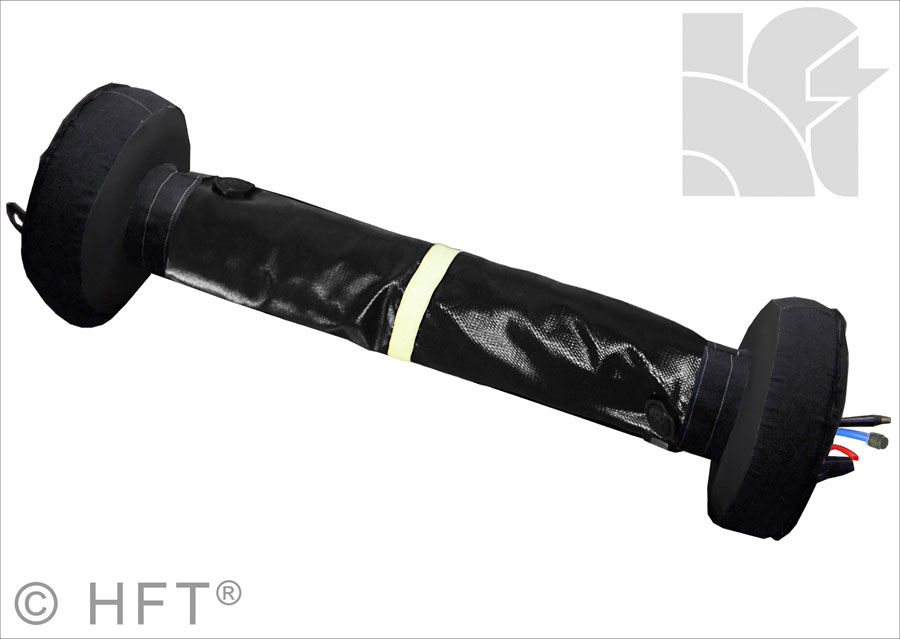 Formerly discs were made from any rigid sheet material; plywood for example was frequently used. The discs were split across the diameter and hinged and a sealing pad of synthetic foam bonded to the periphery. Cords attached to the disc are used to collapse the dam after welding and to remove the discs from the pipe.

However, there have been professionally designed and manufactured pipe purging systems available since the mid 1970s. It is generally more cost-effective to purchase such systems, rather than to have expensive operators losing time by designing and fabricating their own dams.

Note: The use of plywood and synthetic foam are not recommended by the writer. They contain relatively large volumes of water, water vapour, air and other contaminants. In today's world of ever-improving quality demands, where purge levels are requested to show 500 parts per million of oxygen or less, it will be difficult to obtain a stable purging environment with such materials.

A rubber disc can be sandwiched between a pair of wooden or metal discs and some adjustment to diameter can be effected by applying axial pressure. This gasket technique is not collapsible, and after welding the discs must be pulled out past the weld root, an operation which may cause difficulties and damage to the disc edges as they are pulled over the hot and high profile weld root.

An efficient purge gas containment method is to use inflatable dams such as the Argweld® system. This has been developed specifically to provide reusable solution to gas purging. It is easy to use and economical when several similar joints need to be produced. 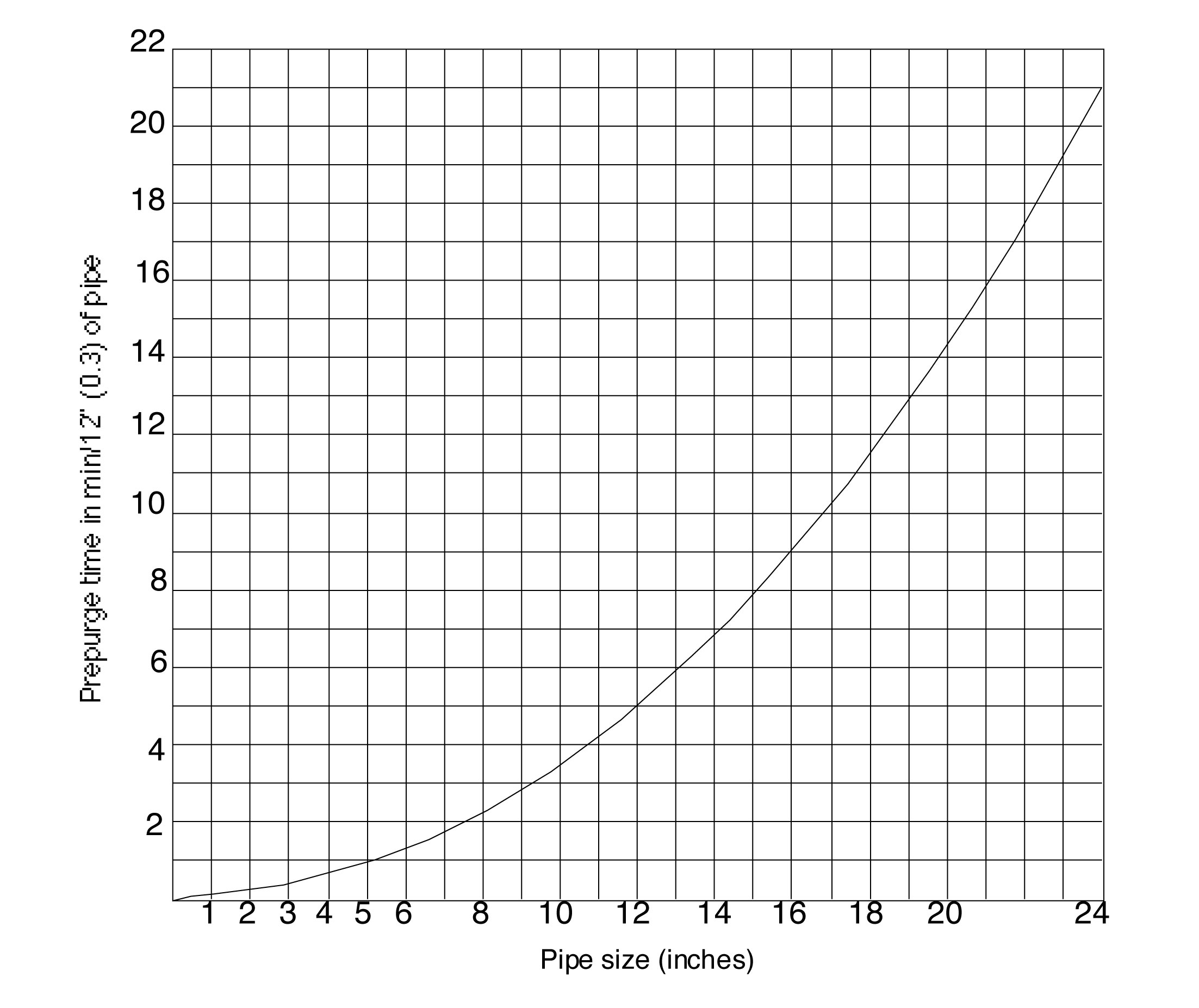 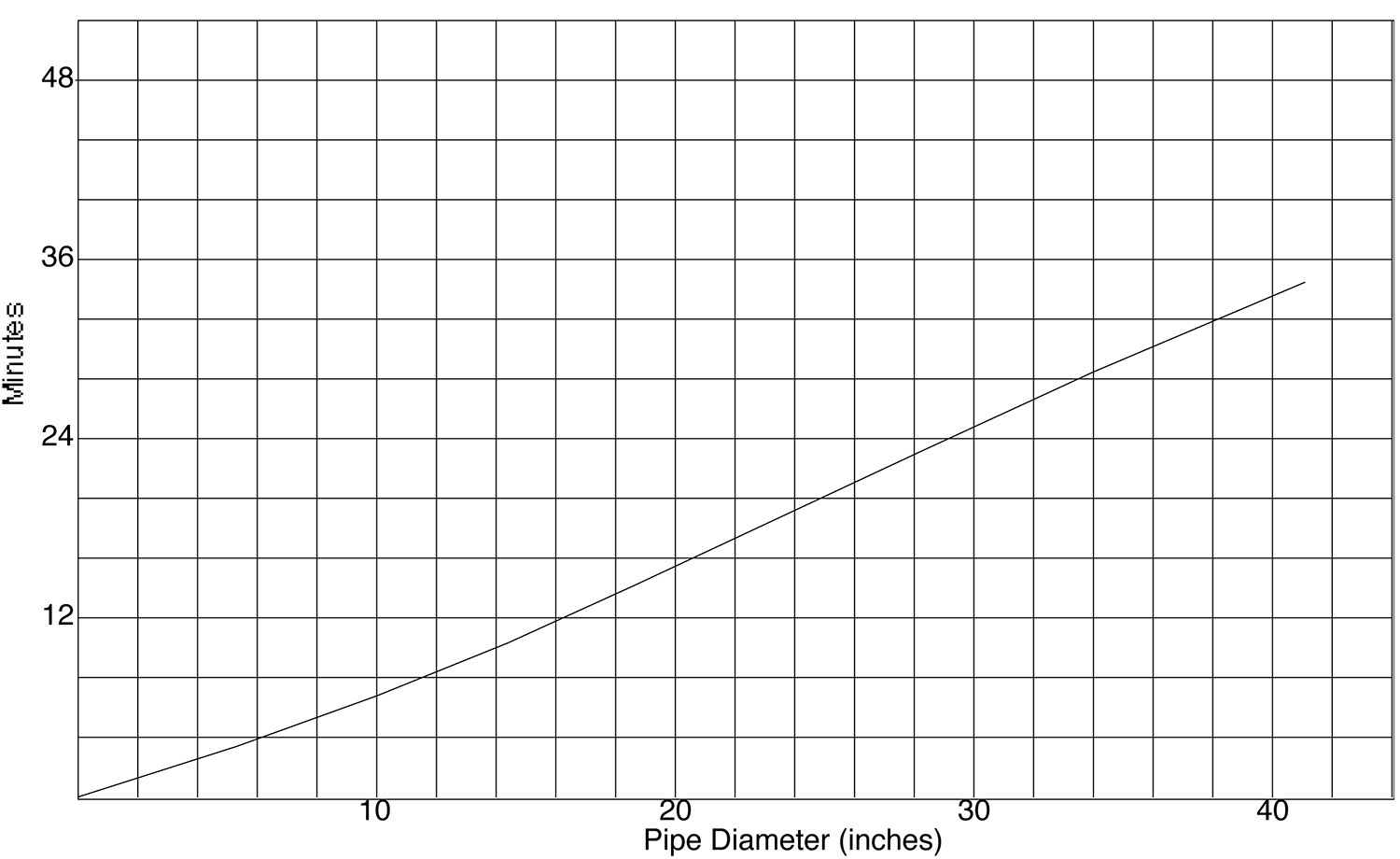 Actual times to purge all pipe diameters down to 100 ppm and 50 ppm with Purgelite® and QuickPurge® II systems are available from HFT®.

Variations of this concept are commercially available.

Purge inlet and outlet pipes are incorporated within the inflatable dams to allow the full circumference to seal against the pipe wall.

A prepurge is used to displace air present in the pipework system or dam volume. Numerous factors control the prepurge time such as pipe diameter, purge volume, and maximum permitted oxygen level. A common misconception is that increasing the purge flow rate will reduce the purge time. This is fallacy. An increase in flow rate increases turbulence and results in unwanted mixing of purge gas and air and can actually extend the purge time.

As a general rule, the prepurge flow rate and time should allow for about five volume changes in the pipe system or dam volume, but a typical gas flow rate will be in the region of 20 L/min. Figure 5 is an illustration of the relationship between prepurge time and pipe diameter based on a pipe purge
length of 300 mm. For different purge lengths, it is reasonable to use a prorata calculation. Table 1 presents examples of purge times for different pipe diameters and flow rates. 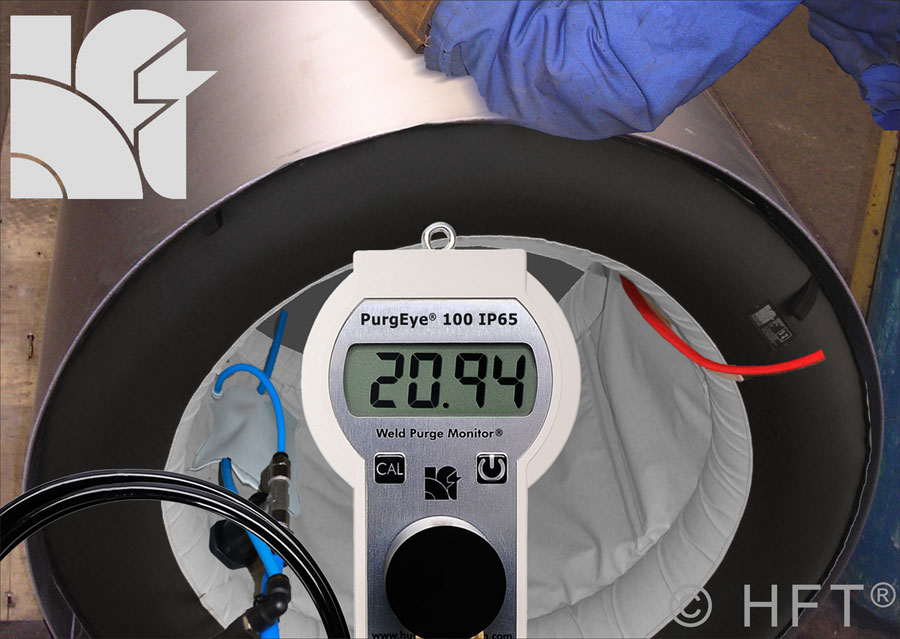 Using systems such as "QuickPurge®II", purging of a 250 mm diameter pipe can be achieved in less than 3 minutes down to a level of 10 ppm with a flow rate of 10-15 litres/min.

Weld joints that require a root opening or have poor fit up, both of which characteristics provide an unwanted leak path for the purge gas, can be sealed by taping.

But not any tape can be used. most contain water or an adhesive that will outgas and put the weld at risk. One company* however has come up with an original and technically sound idea to give welders a way to contain the purge gas but without contaminating the weld pool.

To seal the joint gap, we recommend the use of Argweld® Aluminium Tape placed in the following manner:

This method avoids using alternative water-containing tapes and it avoids adhesive sticking to the heat affected zone. It eliminates harmful vapours being emitted into the weld area as the pipe heats up. The Argweld® Aluminium Tape is stable up to 550 0C (see end of paper).

Figure 6 gives times to reduce the dam volume oxygen content to 0.1% (1000ppm) using inflatable tube and pipe purging systems. While 1% residual oxygen is suitable working level for materials, the level needs to be as low as 0.002% (20ppm) when welding the more sensitive alloys based on titanium and other reactive metals.

Once the quality of the gas in the dammed volume has reached the required level, gas flow can be reduced to about 5 litres/min for the welding operation.

On a more practical note, it should just be possible to feel the gas flow from the exit point, either before the Weld Purge Monitor® is connected, or afterwards.

Excessive flow can cause the internal pressure in the pipe to rise and create concavity in the weld root geometry and in more extreme cases can cause complete ejection of the molten weld pool.

To restrict leakage on joints not fully sealed, a higher flow rate will be necessary to avoid contamination.

Toward the end of the weld run, however, as the joint becomes permanently sealed, the gas flow rate will need to be reduced to avoid pressurisation.
* Huntingdon Fusion Techniques HFT®.