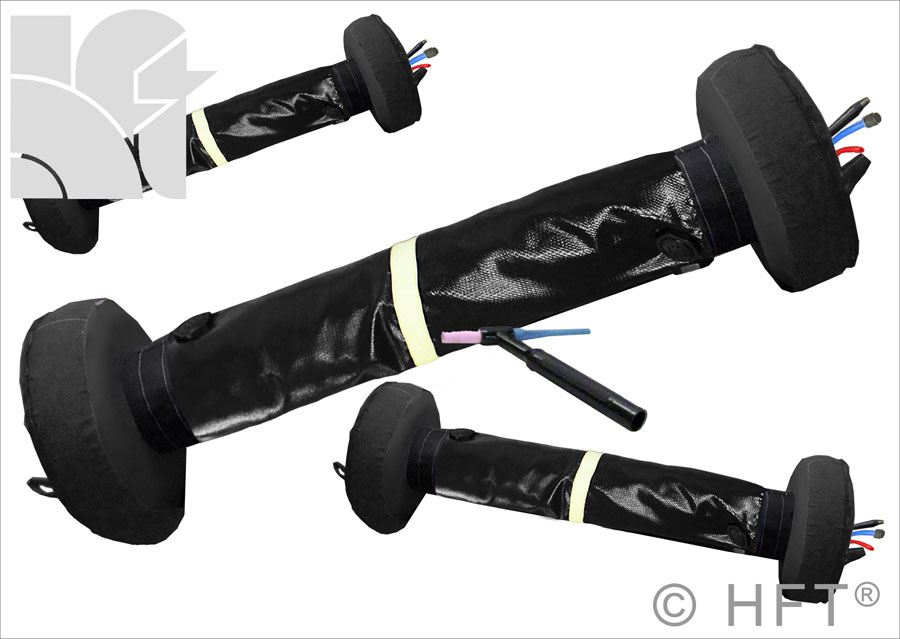 Chrome steel pipe joints, such as those used in the power industry for high pressure, high strength pipework, need to be pre-heated for welding and also require a post weld heat treatment too.

Weld joints of this nature need to be purged of oxygen and welded in an inert atmosphere, to prevent oxidation that leads to loss of corrosion resistance and undesirable change to the metallurgy.

With the high temperatures and length of time at such temperatures, most weld purging systems are unsuitable.

However, Huntingdon Fusion Techniques HFT® has now developed the HotPurge® Inflatable Tube and Pipe Purging System for Heat-Treated Chrome Steel Pipe Joints where the temperatures might be as high as 760OC.

Using HotPurge® Systems allows the purge to be safely continued for up to 24 hours whilst pre-heating, welding and post weld heat-treating with the purge system remaining in place.

Each HotPurge® is manufactured as standard with PurgeGate® to prevent over inflation of the dams. No matter how high the user raises the pressure in order to deliver more gas flow, PurgeGate® prevents too much pressure being delivered to the inflatable dams, but allows the increased flow, should it be required, to achieve a lower oxygen level, or for faster cooling of the pipework.

The large central collar dramatically reduces the space to be purged and makes it easier to reach the lower oxygen levels faster than with conventional purging systems. Each HotPurge® System incorporates an innovative central band for easy positioning inside the pipe. This band, known as RootGlo® will illuminate inside the dark pipe, for up to 20 hours, with only 10 minutes previous exposure to daylight.

Each system is available in sizes 6 to 96” (150 to 2440 mm) and both inflatable dams have pull handles securely sewn with high temperature resistant Kevlar thread that will withstand a pulling force of 1,000 lb.

HotPurge® Tube and Pipe Purging Systems can be used repeatedly for weld purges and will keep the oxygen levels below 100 parts per million (ppm) throughout the welding cycle, ensuring oxide and coke free welds, without the metallurgical imperfections caused by exposure to too much oxygen.