Advances in Weld Protection during Fabrication of Stainless Steel Tubes 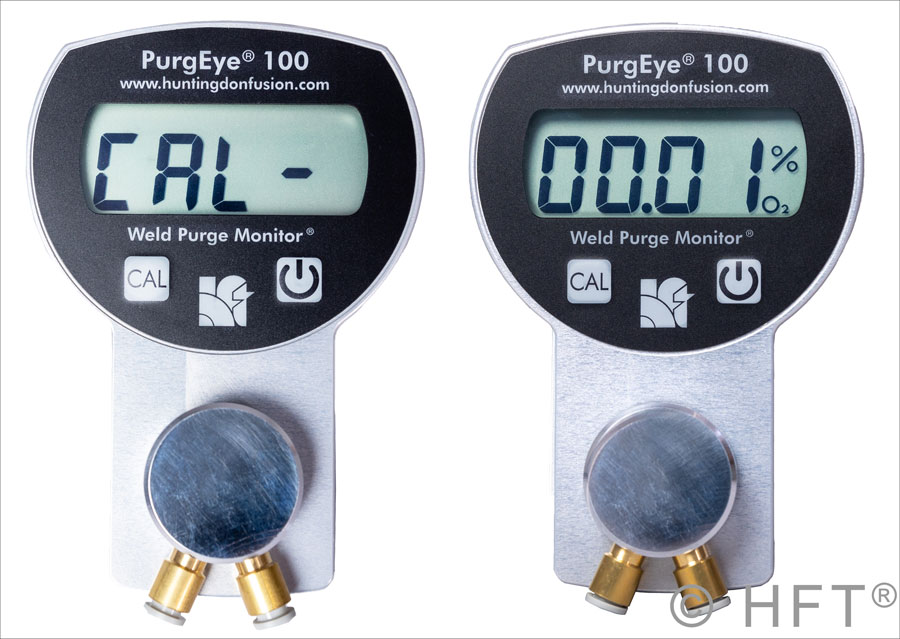 For the welder however there is very little quantitative published information available with respect to quality of purge gas and types of purge techniques. This review proposes maximum oxygen levels in the purge gas to ensure absence of contamination. It also critically analyses commercially available products which have been proven to reduce the time and cost of the purging process.

High-quality joints in stainless steels between cylindrical sections such as tubes and pipes can only be made by ensuring that atmospheric gases are eliminated during the welding process.

The presence of gases, and in particular oxygen, around the molten weld can lead to wide-ranging defects. Discoloration is unsightly and in some instances might produce metallurgical imbalance. Gross oxidation inevitably results in reduction in mechanical properties and cancause catastrophic loss of corrosion resistance. Nitrogen contamination can result in brittleness. Gases in the weld may give rise to cracking during or after cooling.

Basic principles — Weld root quality when making tubular joints can be ensured by applying appropriate safeguards that are based on removal of air from the fusion zone and the provision of inert gas. This is achieved by 'gas purging'.

Purging gases — The most commonly used purging gases in the USA are commercial quality argon and helium. Purge gas flow rate and pressure need to be established and once selected they should be included in the formal welding procedure.

Variation in purge gas quality may arise during welding and it may be desirable to apply continuous gas monitoring, especially to control oxygen and moisture content. For this purpose dedicated oxygen weld purging monitors are available commercially.

Purging procedure — The first requirement is to provide gas entry and exit points. Gas is fed through one end seal with an exit hole at the other end to prevent an undesirable build-up of pressure. Argon has a greater density than air and the gas inlet should be at a lower elevation than the bleed end so that air is expelled effectively from the pipe bore. The converse applies for helium that is lighter than air. 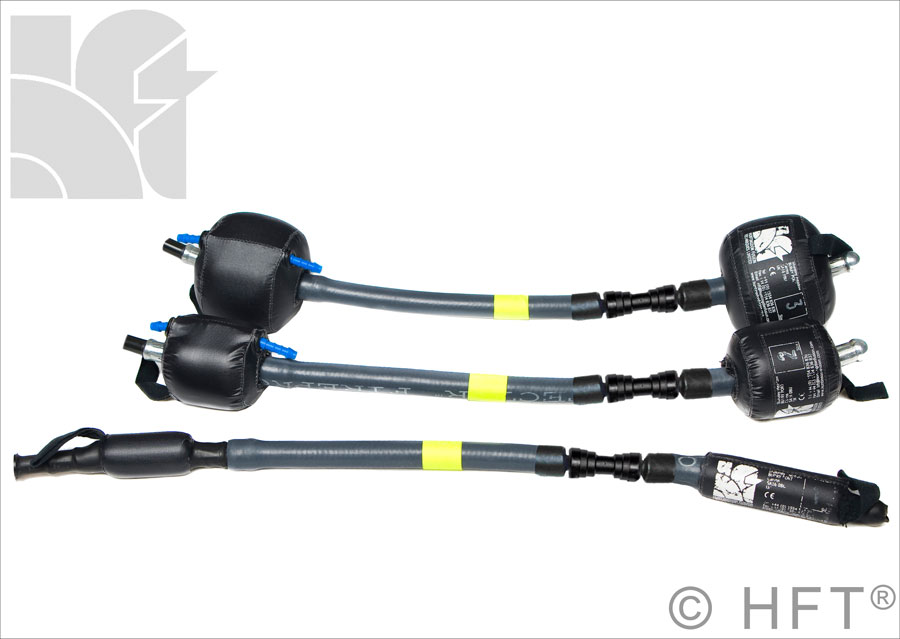 Total purging — On small pipes and tubes, where the internal volume is small, the cost of continuous total purging may not be significant. Under these circumstances wooden or plastic discs simply taped to the tube ends will be adequate.

When total purging is impractical, perhaps because the pipe volume is large or because access is difficult, alternative containment techniques are available.

protection. In the event that water-soluble film is not available, paper and tape can be used, although generally this is much less suitable. They should not be placed in position until after any pre-weld heat treatment and be far enough apart, typically 500 mm, to avoid thermal damage during welding. Purge gas is introduced into the area between the soluble dams by means of a hypodermic tube through the weld joint line or by penetrating one of the film dams with a purging hose.

On small diameter pipes an effective dam can be produced simply by crumpling paper and pushing it into the pipe bore. Soluble pastes are also available and can be convenient for small diameters. 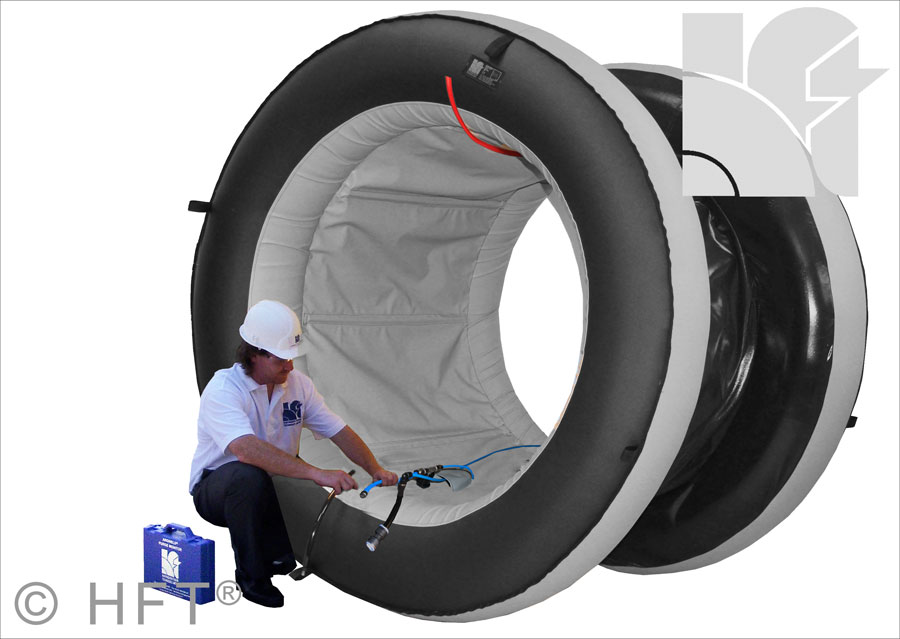 On completion of the welding operation the dam material can be removed by passing water into the pipe and allowing time for it to dissolve the barrier medium.

Thermally disposable barriers — Water-soluble products are not always acceptable and an alternative method is to use cardboard or thin wooden discs. These are simply cut to fit the internal diameter of the pipe and, if necessary, taped in position to provide a gas seal. Distance between discs should be typically 500 mm to avoid thermal damage during welding.

The thermally disposable disc solution is convenient if welding is to be followed by a post-weld heat treatment cycle since the card is removed effectively by incineration. Otherwise general heating by torch is a sound method of removal.

The water soluble and thermally disposable barriers are expedient solutions where access to the tube or pipe bore is impractical after welding. If access can be gained, several alternative purge gas damming techniques, which include collapsible discs, rubber gasket discs and inflatable pipe purge systems, can be considered.

These dams are normally placed in the pipe at the time of joint assembly, a recovery cord or rod projecting down the access route. A spacing of 150 to 200 mm between the dams will usually prevent thermal damage during welding but it should be noted that greater spacing is prudent if pre-weld heat treatment is to be applied. However, there are products now available that have excellent high temperature thermally resistant properties that are eminently suitable for use with pre-heated pipework. 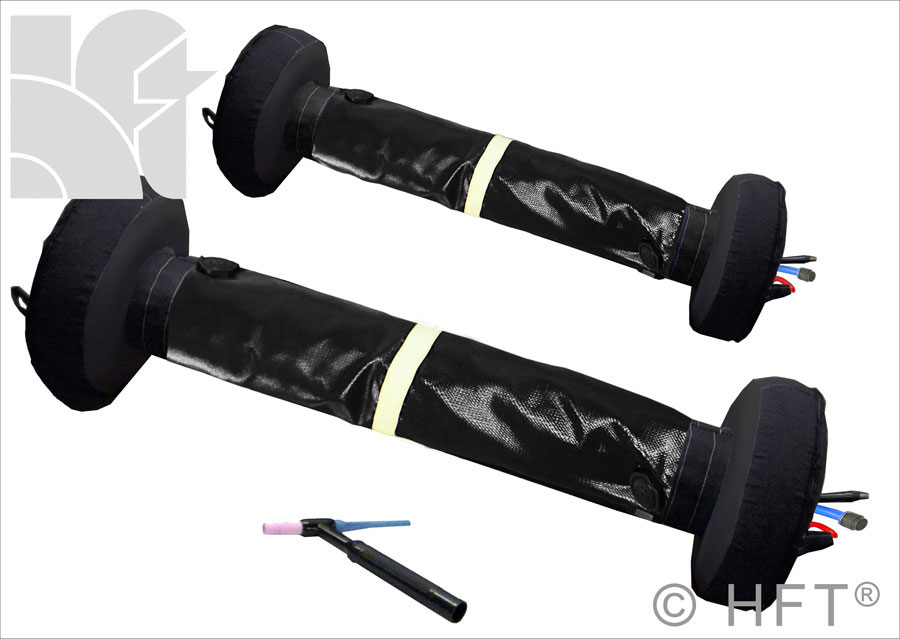 Collapsible disc barriers — Discs can be made from any readily available rigid sheet material; plywood is a good medium if in-house manufacture is planned. The discs are split across the diameter and hinged and a sealing pad of synthetic foam bonded to the periphery. Cords attached to the discs are used to collapse the dam after welding and to remove the discs from the pipe.

Rubber gasket dams — A rubber disc can be sandwiched between a pair of wooden or metal discs and some adjustment to diameter can be effected by applying axial pressure. This gasket technique is not collapsible and after welding the discs must be pulled out past the weld root, an operation that may cause difficulties.

The systems are manufactured from rubber with a protective nylon cover. One is placed on each side of the joint and best inflated using the purge gas itself. Such systems are much preferred since they obviate any difficulties that might arise by water contamination of the weld zone from less suitable materials and of air entering the weld zone from air inflatable systems.

The pre-purge process — A pre-purge is used to displace air present in the pipework system or dam volume. Numerous factors control the pre-purge time such as pipe diameter, 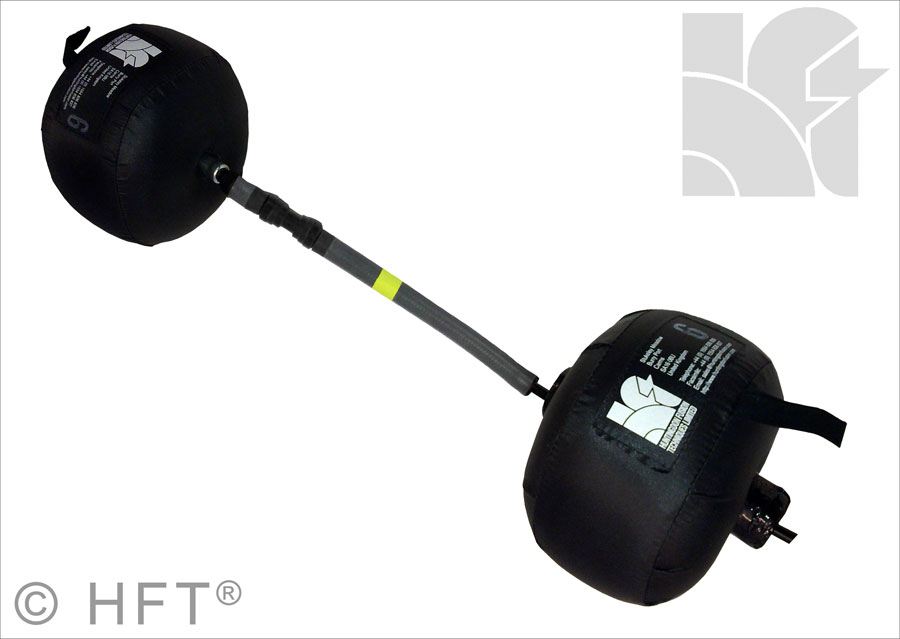 purge volume, and maximum permitted oxygen level. A common misconception is that increasing the purge flow rate will reduce the purge time. This is fallacious. Increase in flow rate increases turbulence and results in unwanted mixing of purge gas and air and can actually extend the purge time. As a general rule the pre-purge flow rate and time should allow for about five volume changes in the pipe system or dam volume but a typical gas flow rate will be in the region of 20 l/min.

Weld joints which require a root gap or which exhibit bad end matching, both of which characteristics provide an unwanted leak path for the purge gas, can be sealed by taping.

Oxygen and moisture levels in the purge gas should be checked using appropriate equipment with checking taking place at the outlet point. Where dam inserts are being used the outlet point needs to be extended with a flexible pipe to a convenient access position. If this is impractical a system that has the purge inlet and outlet in the same dam unit should be used.

Although 0.01% residual oxygen is a suitable working level for materials such as stainless steels, the level needs to be as low as 0.001% when welding the more sensitive alloys based on titanium and other reactive metals.

Once the quality of the gas in the dammed volume hasreached the required level, on joints that are not fully sealed to restrict leakage a higher flow rate will be necessary to avoid contamination. Towards the end of the weld run however, as the joint becomes permanently sealed, the gas flow rate will need to be reduced to avoid over-pressurization.

Process costs — Providing precise data on cost comparisons between the different purging techniques is difficult not least because the pipe diameter and wall thickness have a profound influence on the cost. Furthermore it is impractical to use removable inserts in sealed pipes or in pipes and tubes with diameters much below 100 mm.

It is impractical therefore to be specific across the entire spectrum of diameters and welding procedures, other than to say that savings can be significant when commercial purging systems are employed. As an example, users report that a 900 mm diameter pipe can be fully purged to less than 0.1% oxygen in under 10 minutes when using the 'Argweld®' commercial systems illustrated. There are reported savings in excess of 80% on purge time compared with alterative purging systems so that inert gas usage can be reduced dramatically as a result.  ('Argweld' is a registered trade name of Huntingdon Fusion Techniques HFT®.)

Typical analysis has been made on pipe diameters between 100 and these are presented in Table 1.

It is clear from this basic analysis that where several welds have to be made on similar pipe diameters there can be genuine cost savings when using inflatable weld purge systems as the sealing medium. Add this to the technical advantages of reliable sealing and ease of use and the inflatable purge concept can be seen to offer significant attractions.

It is clear from this basic analysis that where several welds have to be made on similar pipe diameters therecan be genuine cost savings when using commercial inflatable pipe purging systems (see Figs. 3, 4, 5 and 6.) Add this to the technical advantages of reliable sealing and ease of use and the inflatable purge system concept can be seen to offer significant attractions.

By Drs Michael J Fletcher and Ron A Sewell

To read the published technical paper, click on the Welding Design and Fabrication logo below: