Plug and Play for Easy Control

PurgeGate, a unique one way valve with an easy push fit connection are suitable for all types of Inflatable Pipe Weld Purging Systems.  These simple to use valves can be swopped from system to system making them highly affordable.

Easily Moved from System to System 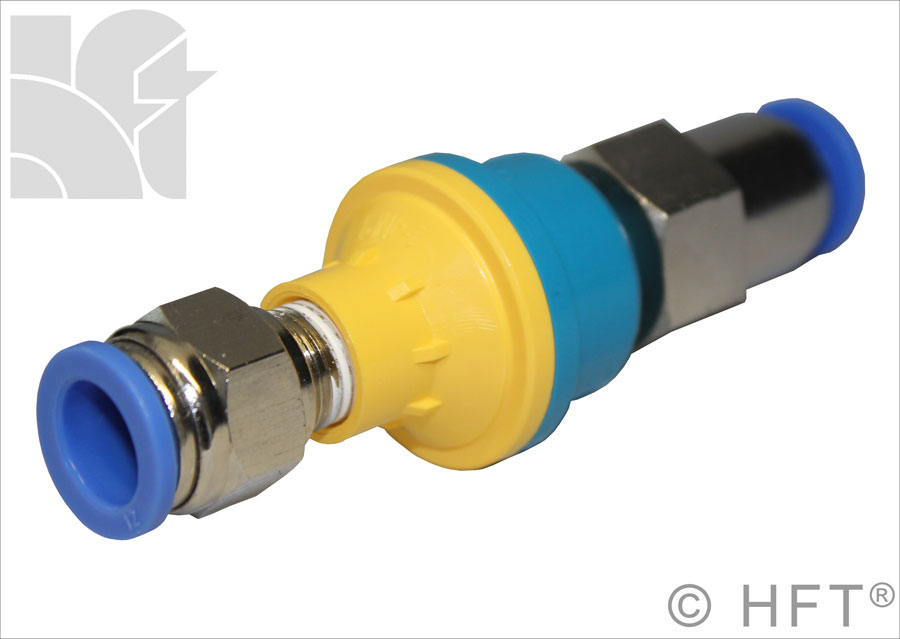 The PurgeGate® System is designed to fit onto systems by HFT®, such as PurgElite® Inflatable Pipe Purging Systems, as well as any other similar devices to prevent the dams bursting due to over inflation.

Inflatable Tube, Pipe and Pipeline Weld Purging Systems are at risk of overinflating during the weld purging process due to unwanted manipulation of gas pressure and flow settings.

PurgeGate® Valves will prevent unwanted and undesirable changes from causing weld failure due to lost purge as a result of dam burst.

These fit all system sizes and can be moved from system to system as the weld size is changed.

The PurgeGate® is fitted as standard onto the range of QuickPurge® and HotPurge® Pipe Purging Systems and can be purchased as an accessory for PurgElite® Tube and Pipe Weld Purging Systems.

Prevent Bursting of All Inflatable Systems

PurgeGate® regulates the gas flow during purging to prevent the Inflatable Tube and Pipe Purging Systems from over inflating.

An accessory to be purchased separately for PurgElite®  as well as for anybody else’s Inflatable Tube and Pipe Purging Systems.

They can be purchased individually.

Can be moved from system to system easily, so very affordable.

Note:  Not suitable for Inflatable Stoppers.

1.0 What is the purpose of the PurgeGate® Valve?

PurgeGate® delivers gas at constant pressure of 0.5 bar and a flow of 7.5 litres/min. Inflatable Tube and Pipe Weld Purging Systems are at risk of overinflating during the weld purging process due to unwanted or incorrect manipulation of gas pressure and flow setting.

By using PurgeGate® Valves your inflatable purging systems will be safe from bursting due to overpressurisation.

2.0 Does PurgeGate® come as standard on any of the Pipe Purging Products?

3.0 Can PurgeGate® be used with other manufactures Purging Products?

4.0 What size Weld Purging Systems can PurgeGate be used for?

The Valve System can fit all system sizes (1 to 88”) and can be moved from one model to another model as required.

Yes! These simple plug and play valves can be used time and time again and easily moved from system to system.

6.0 Which way do I connect my PurgeGate® Valve?

It is important to connect the PurgeGate® in the correct direction with the arrow shown, pointing in the direction of the purge gas flow.

7.0 Where can I purchase a PurgeGate® Valve?

Argweld® PurgeGate® Valves are available for immediate delivery and large quantities kept in stock at all times.

Remember that these PurgeGate® Valves can also be fitted to all similar type of purge bladder systems.

Leaflets and general sales material are available to everyone visiting our website.

Special Note: The items below are restricted and only available in our Secure Login section. This is mainly for the protection of our Exclusive Distributor network.
Should you wish to receive an item mentioned below which is not active as a 'download' link on this page, please contact us or your nearest Distributor.