When inert gas shielded arc welding was introduced nearly 60 years ago, few would have imagined the impact the process and in particular the non-consumable electrode version, would have on the fabrication industry world-wide. 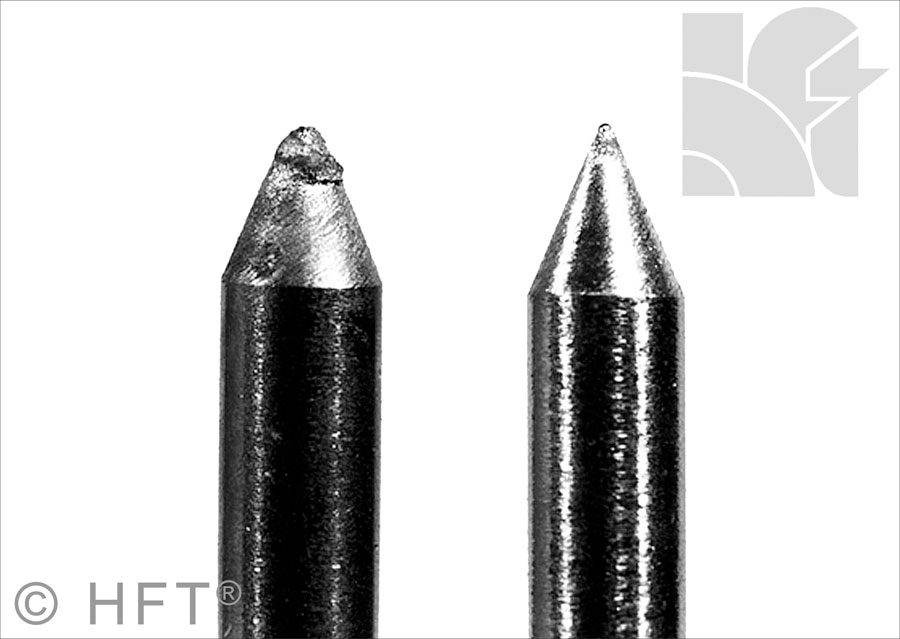 The tungsten arc welding concept was rapidly adopted from the 1950s and made a pivotal contribution to the development of nuclear, chemical and aerospace technology. It is arguably now established as the most versatile technique for producing fusion welds to the highest quality standards.

Since a temperature of around 4000 ºC is generated in the arc during welding, the role played by the electrode is crucial. Clearly it must have a high melting point and it must be non-consumable: Tungsten quickly established itself as the most suitable material for electrodes in arc welding.

As the knowledge of arc characteristics increased it became clear that the use of pure tungsten presented some limitations on process development, particularly arc initiation, stability and electrode wear.

Early studies on the effect of minor additions of refractory oxides, notably thoria, to the tungsten showed that significant overall improvements in performance could be realised and from this work a range of tungsten electrodes containing oxide additions or ‘dopants’ were introduced progressively.

Notwithstanding the potential significance of electrode characteristics, the last 50 years has witnessed the publication of few scientific papers of practical use, covering the performance of tungsten electrodes.

Some of these advocate the widespread use of dopants on the basis of improved welding performance, some highlight the hazards associated with them.

Much of the work is however contradictory and contentious. Many field trials have also been undertaken by suppliers and users and claims made for the superiority of some dopants over others.

Evidence supporting results of these trials is flawed however and cannot be used as a basis on which to make generalised conclusions. Here we present an objective review of what has become an emotive issue–the use of dopants in tungsten electrodes.

The issues under examination fall generally into two categories; those associated with technical and commercial advantages, and those relating to health hazards.

Electrodes are made using a metallurgical process in which powder is compressed and sintered at high temperature to produce rods. The oxide additives are generally dispersed finely in the tungsten powder prior to forming but some products – composite electrodes – are made up of a tungsten core with an oxide coating.

The rods are susequently heat treated and mechanically reduced in diameter to meet the standards which are set down by the market place.(10)

A major advantage of tungsten as a welding electrode material is its low work function – the energy needed to remove an electron.
This is an essential requirement for efficient arc generation. Dopants reduce the work function and thus enhance electron emission.
As a consequence this increases the usable life of the electrode and may also promote arc initiation and stability.

The most commonly used additives are thoria (ThO2), zirconia (ZrO2), lanthana (LaO2), yttria (Y2O3) and ceria (CeO2) and some of these are classified in Table 1.

The commercial manufacturers also produce a range of electrodes which incorporate a combination of dopants (4).

Although the electrode material has a considerable influence on the ease with which an arc can be initiated there exist several other controlling factors. Among these are arc gap, tip geometry, open circuit voltage, welding current, shielding gas and the characteristics of the welding power source.

With so many interacting variables experimentation is time consuming. The relative arc starting performance of any one electrode varies with other parameters; the most difficult starting conditions prevail with low open circuit voltage ie < 35 V, low current ie < 20A and long arc gap.

Castner (5) reported that a 2% ceria electrode offered the best performance but Matsuda (6) found that at low open circuit voltages ceria was inferior to lanthana, yttria and thoria.

Specific but limited work (7) on a multi-dopant electrode concluded that there was little difference in arc starting compared with a 2% thoria electrode, however tests by Huntingdon Fusion Techniques Limited showed that a MultiStrike® Tungsten Electrode will strike 10 times more than a thoriated tungsten under the same conditions.

Review Summary. There is little to choose between the effect of various doped electrodes on arc starting but none of them is any worse overall than pure tungsten. Under certain defined conditions lanthana and ceria offer significant advantages, while the MultiStrike® Tungsten offers considerable striking advantages as well as being free of any radioactive thoria.

A stable arc is a prerequisite for producing welds of consistently high quality. Stability is inversely related to the electrode material work function so that although tungsten is good, additions of dopants with their lower work functions increases arc stability.

There is evidence (5) that some dopant materials are lost from the electrode surface however and may or may not be adequately replenished by diffusion from the body of the electrode. This would have the net effect of progressively reducing arc stability during use.

The Multi doped tungsten does provide a higher percentage of dopant to counter this effect.

Review Summary. Addition of any refractory oxide dopant improves arc stability but MultiStrike® Tungsten is the most effective.

As with arc starting, erosion is influenced by many related variables; even sophisticated research must therefore lead to conclusions based on limited combinations of circumstances.

A major contributory factor is contamination through touch starting and contact with the weld pool. Other factors are electrode tip geometry, welding current, open circuit voltage, shielding gas, parent material and welding power source.
Anderson (7) showed that dopant additions can reduce erosion at high current levels but the conclusion is based on limited work.

Huntingdon Fusion Techniques (8) has shown that multi-doped electrodes perform better than those containing only zirconia under most circumstances on aluminium but again the work is limited.

Erosion by evaporation is an important consideration and the fact that refractory oxides reduce the temperature of the electrode during welding (6), (9) suggests that oxide additions would reduce evaporative losses: the effect of diffusion referred to earlier must be considered however.

Review Summary. Dopant additions of all types reduce electrode erosion under some circumstances but no single dopant is superior to the others under all welding conditions.

Review Summary. Weld quality can be influenced by electrode quality

Health warnings are issued (1, 2, 3, 12, 13) by many legislative and advisory bodies in connection with the use of welding electrodes which contain refractory oxides.

The warnings refer to the potential toxicity and in particular to the risk of inhalation of dust particles from thoria-containing electrodes generated during grinding.

Whilst the use of thoria doped electrodes has not been banned there is a duty of care responsibility on the suppliers and users of these products to take adequate precautions during storage and use.

In all cases a dedicated storage arrangement is advised. With low-volume users this could be a simple metal cabinet but for largescale users a separate room may be more suitable. In either case the cabinet/room walls will probably be adequate to provide adequate shielding against external gamma radiation.(11)

Local exhaust ventilation should be provided where occasional electrode tip grinding is carried out and any surface dust removed regularly by vacuum cleaning. Volume production welding with thoria doped electrodes may necessitate the use of a dedicated tip grinding facility. In these circumstances a system of work based on exhaust and respiratory aids, with suitable arrangements made for subsequent disposal of the dust (12) should be implemented.

Addition of any refractory oxide dopant to tungsten electrodes improves arc stability but ceria or ceria containing multi doped tungsten is the most effective.

Dopant additions of all types reduce electrode erosion under some circumstances but no single dopant is superior to the others under all welding conditions.

Electrode quality and traceability can be an important consideration.

By Drs Michael Fletcher and Ron A Sewell

10. American Standard ANSI/AWS A5 12-92
Specification for tungsten and tungsten alloy electrodes for arc welding and cutting

11. The Health and Safety Executive HSE 564/6 (Rev)
Storage and use of thoriated tungsten electrodes

12. The Health and Safety Executive: Guidance note EH53
Respiratory protective equipment for use against airborne radioactivity